Ticks are arthropods that belong to the spider class and are insects.
There are various species of ticks that humans may encounter. Each of these species has adapted to a specific way of living based on the host type and the specific environment. When we enter tick infested environments or come in contact with tick infested animals we will most likely encounter ticks.
Some ticks prefer domestic animals while others prefer birds. Anyone around farm livestock is likely to come across one or more types of ticks.
Some ticks, called dog ticks, prefer dogs as their hosts. Whoever raises a dog will eventually come across these ticks on their dog, in the dog’s surroundings and sometimes on themselves or other family members.
Cave ticks, another species of ticks, are often found in caves or ruins. These ticks are not picky and will suck the blood of any warm-blooded living creature in their surroundings.
Familiarity with some of the characteristics of fleas can help us avoid, as much as possible, an encounter with the various kinds of ticks, keep our reactions in check should such an encounter occur and alleviate fear of ticks.
This section addresses dog ticks which belong to the ‘hard ticks’ group, Rhipicephalus Sanguineus in Latin.
Predominant characteristics
Dog ticks are common in residential and open areas. These ticks feed on blood from dogs, however they can sometimes be found on other warm-blooded animals, including humans.
Ticks [*], like other spider species, have four pairs of legs and do not have antennae. They can sometimes be seen walking on three pairs of legs, while the front pair is raised in the air like sensors. The explanation is that this is where the sensory organs that detect the body temperature of their victims are located.
Another characteristic pertaining to its legs and differentiating it from the other spider species is the fact that on hatching from the egg, ticks have only 3 pairs of legs, with the fourth developing into an eight-legged nymph only after molting.
The tick’s goal is to reach a host as quickly as possible. To this end, immediately upon hatching, or at the start of spring as the weather warms, the tick will climb onto a shrub and wait for a long period of time which may last weeks and sometimes months – until a warm blooded creature passes adjacent to or under the shrub. The tick senses the victim’s body heat and the secretion of CO2 and quickly attaches to it. When a tick enters a building it climbs walls and furniture and similarly waits patiently for its next victim…. or the exterminator.
Dog ticks have excellent mobility and tend to move on the surface and climb on dogs that are resting or chained. 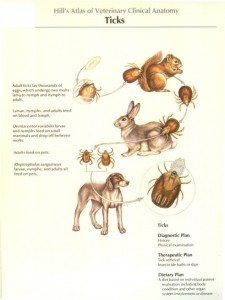 The Tick Lifecycle
Mature ticks lay thousands of eggs. They have four development stages: egg, larva, young tick and mature tick. At all stages of development they feed on blood or lymph fluid.
Blood sucking
Ticks suck blood for several days while producing a substance that glues them to the host’s skin. Ticks secrete a numbing chemical into the host body that prevents pain, which is why it is hardly felt by the host. The size of the male tick does not change while sucking blood, while the female swells to huge dimensions up to the size of an olive pit, changing color from brown black to gray. The tick needs this blood to produce eggs.

Laying Eggs
After blood sucking the female tick detaches from its victim, falls on the ground and looks for a hiding place where it lays thousands of eggs all at once and dies. If the tick ended its life near your house, or even worse, in your house, you will wake up one morning into a nightmare in which your home has become the home of thousands of small ticks that run around the house, climbing up walls and on furniture in the aim of finding themselves a victim.

About Raising Dogs and Ticks on People
When people decide to raise a dog at home or in the yard they must be aware of ticks and treat the dog regularly throughout the year. They must also understand the effect of the change of seasons on ticks, in terms of the beginning of their activity season and be familiar with their special characteristics.

Lack of awareness, neglecting the dog or ignoring the issue may ultimately result in a severe health hazard and serious diseases transmitted from the ticks to humans and to dogs.
People usually raise dogs in several ways: at home, roaming free in the yard and tied in the yard. Each of these entails characteristic problems that demand awareness, treatment of the surroundings and treatment administered to the dog.
A person’s best friend changes the surrounding environment.
One of the main factors that ‘invite’ the undesired encounter between humans and ticks is human’s best friend – that also maintains good relations with ticks.

Whenever you raise a dog you must take into account the implications involving ticks. Ignoring this issue may bring about extreme situations entailing a tick attack in the house or in the yard, or contracting tick-related diseases.
Taking basic preventive measures will in most cases avert tick problems related to raising a dog. 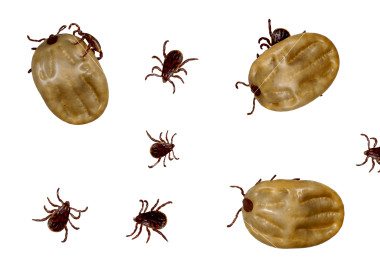 Ticks on Humans
Ticks climb on humans when the latter spend time in uncultivated land, while on trips, working in the garden or when in an area with tick-infested animals. Ticks get under clothing and will usually be found in hidden body areas such as: the groin, armpits, in the back of the ears, in head hair, on the waist at the belt line or among fat folds. If you find a tick on your body, remove it and check if your temperature goes up or for signs of blemishes on your hands or skin. In the weeks after removing a tick from your body, if one of these symptoms should appear, you must see a physician and indicate the fact that you found a tick on your body.
Ticks are carriers of various parasites, among them Ehrlichia canis that is the cause of tick fever in dogs.