Fleas are tiny bloodsucking insects that cause irritating bites and may transmit diseases to humans or animals. Their presence is related to that of animals that serve as hosts, mainly dogs, cats and rats.

There are more than 2000 different kinds of fleas. Many are not unique to one host species and some show a preference for a certain species. The movement of fleas between hosts in order to bite and suck blood is the cause of disease transmission. 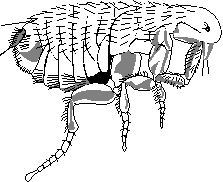 Life Cycle
Familiarity with the flea life cycle is necessary in order to exterminate them. The flea is an insect that goes through a full lifecycle. Only adult fleas are blood sucking parasites that live on a host. The egg, larva and pupa live and develop in the ground, in houses, among rug fibers, etc. Therefor steps must be taken simultaneously to get rid of the fleas on the host as well as preventive and riddance measures in places where the earlier stages develop.

Flea Development
The duration of flea development is not fixed and depends on food and environmental conditions, mainly temperature and humidity. In summer, under optimal conditions, development from the egg to the emergence of the adult spans 18 to 32 days, while in winter is can take several months. The female flea can lay hundreds of eggs during its lifetime, depending on its ability to bite and suck blood. The eggs are laid in between the host’s coat hair, 3-18 eggs each time. As the eggs are not sticky, they fall to the ground, usually where the host spends most of its time. The eggs are small and light colored and it is difficult to see them with the naked eye.
Larvae
Larvae are white and tiny, wingless and limited in movement. They run away from light, prefer the dark. Outside they develop in the upper soil layer and in houses at the base of rug or upholstery fibers, where pets spend most of their time. In order to develop, larvae need minimum moisture, feeding on organic material found in the soil and from the secretions of adult fleas that contain congealed blood. These qualities of the young flea stages, along with the fact that their body is covered with long bristles to which dust clings and which creates a camouflage effect, makes it very difficult to detect them even when looking meticulously to check for infestation.
At the end of the third larval stage the larva weaves a thick cocoon and pupates. Under cold and dry conditions, or when there are no hosts in the surrounding area, the adult larva, still resting in the cocoon, can withstand the difficult period until conditions improve or a host appears. A synchronic emergence of many adults in response to a stimulus cause by the appearance of a suitable host is often observed when entering a yard or a house where there were animals in the past and that were empty of their inhabitants for a long period of time. Owing to this characteristic fleas have a high degree of survivability which makes it difficult to exterminate them.

Adult Fleas
Adult fleas have very long hind legs which accord them excellent jumping ability. Their color is red-black, their length 1-3 mm and they are flat-sided and wingless. Their body looks as if it is one unit, with a big belly in relation to their head and chest. Their mouth limbs are built like trunks, suited for puncturing the host’s skin and drawing blood.
Adult fleas, male and female, only feed on the blood of hosts with fixed body temperature – birds and mammals. While sucking blood the flea secretes saliva into the host’s body that contains anti-coagulant substances. In some species this saliva may contain pathogens.
Fleas are not limited to one host and can easily move from one host to another and spend much time in the area. Fleas are very sensitive to the host’s body temperature. They leave dead hosts who are cold and living hosts whose temperature has risen. This phenomenon is of epidemiological importance in disease transmission.
Fleas can fast for several months if they do not find a host. Flea secretions that contain undigested clotted blood look like tiny black granules among the host’s hair. It is difficult to detect the fleas themselves on the animal as they are very good at evading and tiny particles of clotted blood indicate their presence. Many people incorrectly think that the clotted blood particles are flea eggs.

Fleas in Israel
There are about 40 known flea species in Israel, among them:
Cat flea (Ctenocephalides felis) – the most common flea that infest humans and livestock. In nature they infest rats, wildcats, jackals, mongooses, hyenas and hares. This is the most common flea on dogs and cats, in houses and yards. This species causes most of the irritating flea bites. Under certain conditions the cat flea may transmit the bacteria that cause murine typhus. Animals and children that swallow adult fleas may contract tapeworm.
Plague flea (Xenopsylla cheopis) – although it is not the species responsible for most of the irritations caused by flea bites this species is very important as it acts as a vector for plague and murine typhus.
Its dispersion is worldwide and corresponds to the dispersion of its main host – the Norwegian rat.The population of the plague flea reaches its peak in the summer months. In October its prevalence is significantly reduced and in the winter it is quite rare. In Israel the plague flea is commonly found on rats, but rarely on wild rodents.
Human flea (Pullex irritans) – was common in human dwellings in the past, but is quite rare today in man’s immediate surroundings due to modern construction and modern hygienic conditions. In nature this flea is prevalent on large mammals that live in caves such as porcupines, jackals, foxes and mongooses. Human fleas may appear in areas in which wild animals are found near human surroundings such as farms and ranches.

Fleas as Pests
Bites – flea bites may itch for several days and cause allergic skin infection mainly in dogs which in turs causes severe scabies, baldness and thickened skin.
Anemia in animals – may develop following massive infestation of fleas, which in extreme cases, mainly in puppies as well as old or sick animals, may end in death
Transmission of parasites – tapeworm (Caninum Dipylidium) that lives in the intestines of dogs and cats and on rare occasions in human intestines, is transmitted by swallowing an infected flea. Fleas are a necessary intermediate host (obligatory vector) for tapeworm and are necessary for its transmission. The flea larva is infected after swallowing tapeworm eggs found in the feces of an infected animal.
Transmission of infectious diseases – during its lifetime a flea bites and sucks the blood of several hosts of the same species or of different species, and therefore is an important factor in transmitting infectious diseases. Along with the blood it also sucks pathogens such as bacteria, viruses and blood parasites, and with the next bite these are transmitted to the next host.